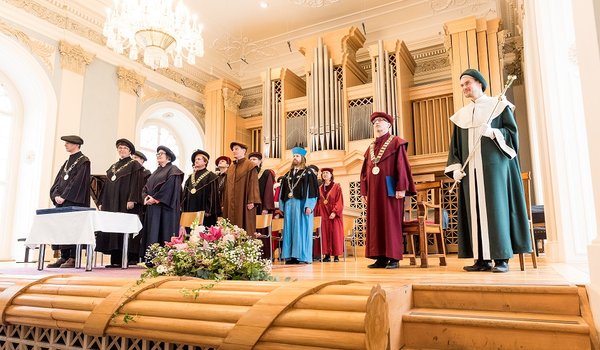 To the Honour of the Muses

Honorary Doctorates Awarded by the Academy of Performing Arts in Prague

On the occasion of the so-called octonary anniversary, the Academy of Performing Arts in Prague (AMU) has published a book of festive speeches by prominent figures who have been conferred the honorary title of doctor honoris causa by the Rectors of AMU. The publication offers readers a look into the life paths and artistic and intellectual struggles of seventeen personalities representing the four artistic areas that AMU cultivates: theatre, film, music and dance.

Along with the title of professor, an honorary doctorate is the highest recognition of an individual’s life and work which a university (in the case of a professorship, the President of the Czech Republic) confers. It accentuates the quality and values which the university wishes to communicate to the academic community and outwardly to society. AMU’s first honorary doctorate was conferred upon Václav Havel in 1996. Over the course of the subsequent 22 years, this title has been conferred upon 17 internationally acclaimed artists most of whom also studied at AMU. The most recent recipient of a doctor honoris causa from AMU is Agnieszka Holland.

Honorary Doctorates Awarded by the Academy of Performing Arts in Prague